Las Vegas goes green for the O’Sheas BLOQ Party at The LINQ Promenade.

With St. Patrick’s Day being on a Saturday in 2018, you KNOW there’s a party in Las Vegas.

Here’s what’s happening at the The LINQ Promenade – the annual O’Sheas BLOQ Party, a free celebration in the heart of Las Vegas.

The block party, centered around the iconic Irish-themed casino and pub, O’Sheas Casino, is a traditional St. Patrick’s Day celebration with a Vegas-style twist. Activities include a parade,  Irish-inspired food and drink specials and live entertainment throughout The LINQ Promenade. And bars with plenty of flowing beers from the bars.

At noon, a parade led by a green, brand-new Bugatti from Royalty Exotic will march through the open-air entertainment district. An Irish b-boy dance troupe will join the parade this year, along with bagpipers (who will bring out the LED for the parade for the evening performances), leprechauns, stilt walkers and Irish dancers.

Live performances will continue throughout the day at the BLOQ Party along The LINQ Promenade, which concludes at 10 p.m.

Additional entertainment on the Promenade will include celebrity beer pong and large-screen TVs broadcasting the college basketball championships. Meanwhile, O’Sheas will host a lineup of live entertainment including Roxy Gunn, Silversage, Darby O’Gill and DJs, as well as drink specials, inside the pub, ensuring a rollicking good time for all until 3 a.m.

An abundance of spirits will be available all day including green beer (of course!), Irish-themed cocktails and pop-up beer trucks to ensure the flowing of celebratory suds. Food specials will be available at participating restaurants including Irish favorites such as corned beef, shepherd’s pie and a St. Paddy’s-themed pizza.

No LINQ Promenade party would be complete without the illumination of the High Roller, the world’s tallest observation wheel, which will be lit in green beginning at sunset.

Exclusive St. Paddy’s Day offerings at The LINQ Promenade are: 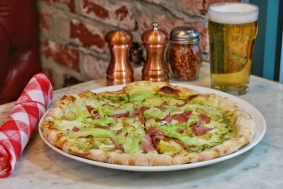